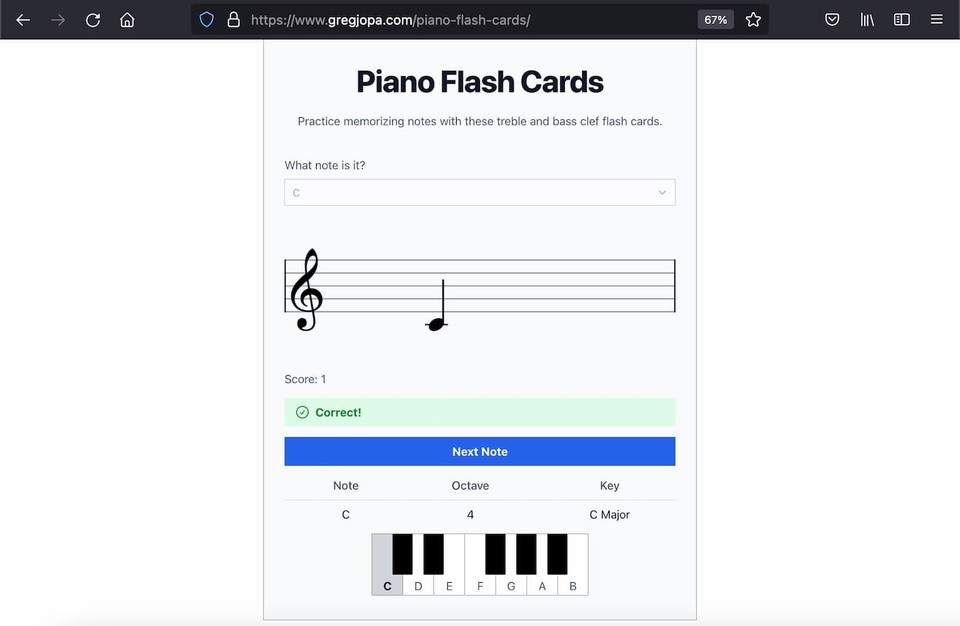 My wife and I recently got a piano and are learning how to play. I used this as an excuse to build another app with the Vexflow music notation library. In this post I'll share how I developed this flash card game to practice reading music notes and what I learned along the way.

Piano teachers frequently have students buy flash cards to practice reading music notes. This inspired me to build a flash card app and make it more fun by adding a score concept with difficultly levels. Here are the concepts of the piano flash card game:

A great place to start when building an app like this is the component architecture.

As you think about the answers to these questions it's helpful to sketch out the UI and highlight the individual components. This will likely evolve as you develop your app. But it does help as a starting point. Here's a rough mockup I put together using Excalidraw. 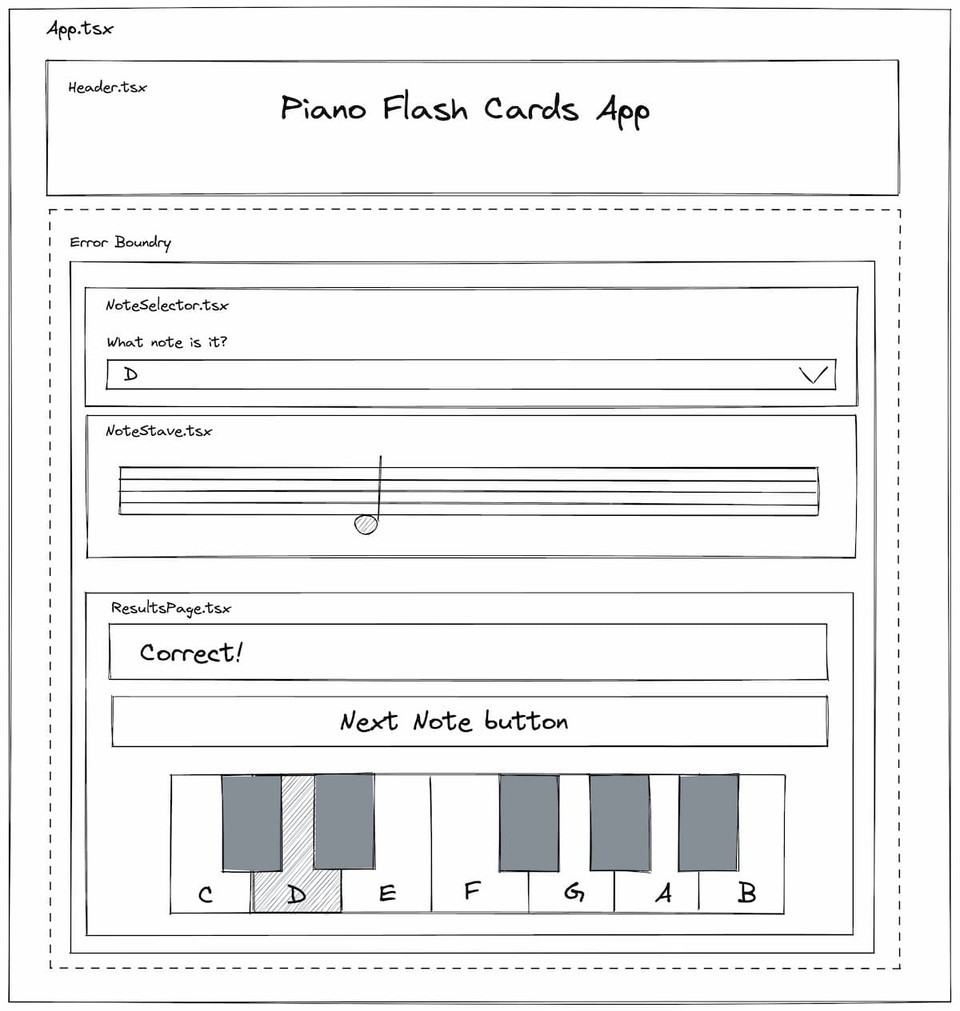 After identifying the UI components, it's helpful to think about the state you need to track with your application. Usually, you want to leverage the URL path and/or query string for helping control state changes. However, one thing I want to avoid is the user cheating by seeing the note to guess in the URL or skipping to the final difficulty level by changing the URL. Based on this, I want to treat this single page app like a video game where there's no way for the user to skip ahead.

This app needs to manage the following data and store it in memory with useState():

When building this flash cards app, I need the Vexflow library for two things:

I used TypeScript for this app, and I was presently surprised by Vexflow's TypeScript support. It ships its own type declarations and many of the public interfaces include helpful descriptions.

One thing that tripped me up is that Vexflow no longer supports ES5. The formatter module does not work when being transpiled to ES5. I used create-react-app for this project which transpiles to ES5 by default. This caused my production builds to fail, and it took me a while to figure out why. After changing it to target ES6 it fixed the issue. There's no need to support IE11 and other older browsers with this app so I used the following code to display a message to users on unsupported browsers.

I really enjoyed building this app with create-react-app. This app is client-side only so there was no need for a framework that supports server-side code. Here's why create-react-app is awesome:

I recently watched this "Goodbye, useEffect" Video and decided to apply it to my app. Initially I focused on getting this flash card app working and I reached for useEffect to synchronize state across components.

At first, I had the Next Note button event handler update the GameState only and then had the useEffect hook react to it and finish up the rest of the state updates. Here's a simplified example,

I learned from this talk that event handlers are a better place to manage side effects with state updates. I applied this learning and was able to get rid of useEffect altogether.

The other fun refactor I did was reducing the amount of useState() calls I made by combining the related state data into a single nested object.

I used Tailwind for styles. Here are my favorite things about Tailwind:

It was a lot of fun building this piano flash cards app and it's helped me with learning piano and getting faster at reading sheet music. React and Tailwind continue to be great tools for building rich UIs. Please give this app a try and let me know your feedback on GitHub!